Three little seedlings, and how they grew…

Showing up in pots around the yard, I wasn’t sure at first what they were, but took a guess they might be evergreen starts, so I dug up a few and put them in pots. I kept them under our upper deck in an area that soon came to be known as The Nursery.

They were pretty excited during the prep for the trip to the park:

They spent a couple of days near the entrance to the park, waiting to be planted…

…which happened on a beautiful Saturday morning in February, 2016:

Many thanks to Friends of Lincoln Park leader and volunteer forest steward Sharon Baker, and UW seniors in the Program on the Environment Celina and Bethany.

I will return to visit and encourage these three little trees as they do their best to make it in the Big Woods, and I’ll keep adding pictures along the way: 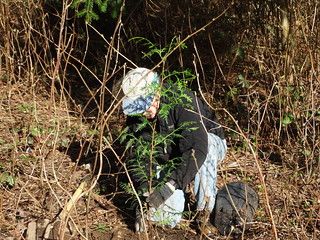 Those seedlings were planted in an area long neglected, and overgrown with ivy and blackberry. However, the natural forest area in Lincoln Park is actually growing, thanks to Sharon’s efforts with Friends of Lincoln Park, with students like Celina and Bethany, and the work of EarthCorps and the Green Seattle Partnership.

Below is a big view of where those three seedlings were planted. You can’t see them because they are so small, but the “big” cedar is in the right front edge of the grass, the smaller one is on the left front edge, and the yew is in the middle, back 20 feet. With a southern exposure, they will hopefully grow fast, and become the new towering trees at the edge of the forest.

Just give ’em a few years. Or decades. They’ll get there.

I am a retired teacher, with dreams of still making a difference.
View all posts by Mark Ahlness →
This entry was posted in Uncategorized. Bookmark the permalink.

1 Response to Three little seedlings, and how they grew…